How an industrial engine is harming our kids, and leaving our neediest behind.

45 states successfully vied for $4.35 billion in Race to the Top Funds
The requirement: States must adopt “college-and-career ready standards.”

We have to adopt Common Core because:

2.)”Risk to National Security”
As warned by the council of Foreign Relations.

And because that’s a lot of money up for grabs…

Spent TWO YEARS compiling data on common core benchmarks
(reading) and (math)
With only TWO academic content specialists
Two years, and two specialists
Does not equal
Outcomes on a 13 year program (K-12)
For Millions of children (all different)
Students, teachers and parents did not play an active role in drafting the standards.

it’s a pipeline, and it’s eduprenurial

It’s turning kids off to school

By forcing a harder curriculum:
Many students fall even farther behind
–>
Get discouraged
–>
And drop out

Common core teaches algebra in the 8th grade
During a plateau in childhood brain development
Making it much harder to deal with and retain new concepts
Rationale: students with algebra have more options when they graduate, and the earlier one takes algebra, the more advanced courses they can take before college.

In real life: Algebra at too early of an age turns kids off to math, and often becomes a cited reason for dropping out, ultimately leaving kids with less options.

8th grade Algebra proficiency levels plummeting:[7]
New Mexico: 43%
Tennessee: 39%
West Virginia: 35%
Oklahoma: 33%
Perspective: in the real world, how many times will an employer ask you for a proof of the quadratic equation?

Is the system really working?

Only 1% of the 1.7 million bachelor’s degrees awarded last year were in math
Coupled with the fact that only 58% of those that enter higher education graduate
Meaning only .0058 of those who enter college will successfully graduate as math majors
(That’s 58 out of every 10,000 matriculating students)
Think about it: with the well documented negative effects of forcing math at too early of a developmental stage, we could be weeding out the next Pulitzer prize winner, famed historian, or innovator by turning them off to school.

And hurting at risk students the most.

Should education be harmful to students?

In Florida:
Michael is a 9 year old boy who has never set foot in a school. He was born prematurely at four pounds, with only a brain stem, unable to speak or see. He is expected to be tested.[6]
Many states:
Have policies for what to do if students vomit or urinate from test anxiety.

The flawed argument:
By instantly raising the bar many kids will fall behind, but some will excel even more.
Giving corporate America and the government more recruits. 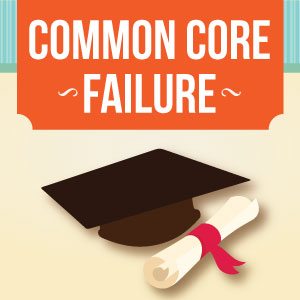