A brief history of private boarding schools
• 43 B.C.: Chengdu Shishi high school established in China
•  597: The King’s School, Cantebury. It is the oldest private school in the world still operating.
• 1500s: Private schools date back to the schools opened by Catholic missionaries in Florida and Louisiana
• 1628: Collegiate School, Manhattan, founded. It is the oldest private school in U.S. still operating.
• 1850s: Private school “academies” numbered 6,000…for the upper class
• 1879 private secondary enrollment made up 73.3 percent of the total
• By 1900: only 7 % of students enrolled in private schools
• 1946: Army Prep School established; a stepping stone to the U.S. Military Academy at West Point

Pros and Cons of Going to a Prep (Private) School
Pros:
• Private schools focus on specific topics.
• Smaller class sizes.
• Private schools have better books and supplies.
• More access to up-to-date computers.
• Curriculum is more challenging.
• Most private schools are religious based schools.
Cons:
• Cost
• Teachers are not required to have a teaching degree, just knowledge of the subject they will be teaching.
• Less diverse choices in subjects
• No special education classes available.
• Students must pass an entrance exam to be admitted.
• Most private schools are religious based schools. [This can be a pro or con, depending on the student’s family values] 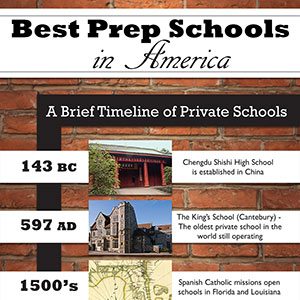