The 10 Best States To Find A Teaching Job 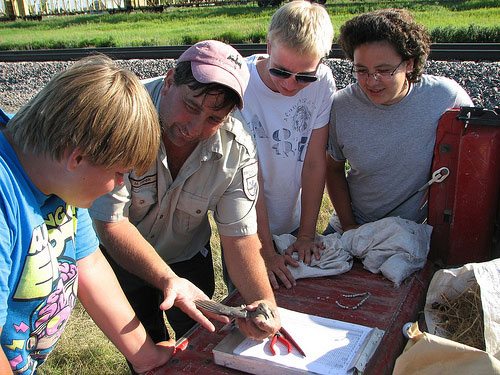 North Dakota students in an outdoor learning environment (Via)

Miners used to say that to go on working, they had to follow the coal. The problem for teachers has been their form of coal just didn’t exist. Population contraction meant fewer children. Fewer children coupled with population migration meant that wherever the children were, they weren’t likely to be in the state where a teacher lived. This, along with cutbacks to education, amounted to hard times for the practitioners of one of the hardest and most important jobs of all. Wherever schools were hiring teachers, they were paying less. Layoffs are epidemic. Jobs are less secure. Teaching positions at charter schools bring a whole new set of opportunities but also challenges.

For a teacher willing to relocate, there are schools that are hiring now. In most states, there is a severe need for bilingual, ESL, special education, math and science credentials. There’s also a growing need for special ed teachers whose training focuses on well-defined types of disability. Elementary school teachers may enhance their hiring prospects through being certified to teach a subject on a secondary school level.

The good news is with the baby boom generation reaching their sixties in droves, there will soon be one million teachers retiring. In fact, due to fewer people going into the profession, especially in the regions where there has been much of the job loss, there is expected to be a shortage of teachers over the course of the next seven years. This will be most problematic in the urban and rural areas of the southwest and southeast. That need for new teachers will be reflected in the following, compiled through data gathered from the US Department of Labor and the National Education Association.

Funding their school coffers in part with oil money, North Dakota doesn’t plan on any reductions in school funding. They also have a very low overall population, and college graduates generally leave the state in search of excitement, leaving the state chronically in need of teachers. Starting salaries are at or near the bottom at $25,000, but there are jobs.

In an attempt to lure teachers to their sparsely populated state, Alaska offers a beginning teacher salary of about $36,000. The state reports shortages in all areas, with a particular need in special education, math, and science.

This state has a higher starting salary of $37,500 and an average salary over $55,000. Illinois also has retirement waves going on. There continue to be shortages in all areas, with a particular need in special education, math, and science.

The retirement state is seeing its own wave of retiring teachers. Florida faces a current shortage of teachers due to this and because of a recent state constitutional amendment requiring reduced class sizes. Teacher salaries begin around $30,000. Job prospects are said to be fair to good.

Arizona has a need for teachers in many categories, especially foreign language, special ed, bilingual, ESL, math, and science. Salaries starts at $28,000 and average around $44,000.

Connecticut reports a shortage in speech and language, special ed, music Spanish, bilingual education, science and math teachers. Connecticut is known to be a teacher and education friendly state with many perquisites for those who enter the field.

Beginning teacher salaries in Alabama start around $31,000. The state has a teacher shortage in many areas, particularly in special education, science, and math.

Beginning salaries for teachers in Arkansas start around $29,000. They report teachers are needed in math, science, and ESL.

Texas has long been thought of as a bad prospect for teachers but lately is showing serious signs of life. School districts are said to be hiring thousands of teachers. The prospects are only going to get better. Again, the most severe shortages are in secondary science and math teachers. Starting salaries begin around $33,000. Average salary is about $41,000.

With current shortages in the usual fields, there are predicted shortages of teachers across many categories. The average teacher in North Carolina earns $43,000. Beginning salaries start around $27,000.

Some other good job prospects for years to come include Nevada and California. In general, the future for teachers is at last looking up.